The New Control Word is ‘Health’ 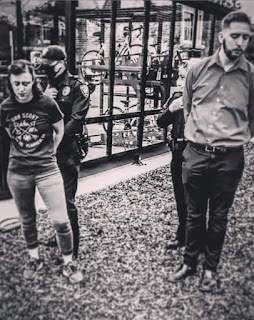 The New Control Word is ‘Health’

There are different ways to control people. Rarely do you find a tyrant begin by lining up people in front of a ditch and executing them. Many small steps led to the final solution. At first, the Jews were denigrated by being forced to wear a badge that identified them as Jews. Then they were publicly maligned:

Nazi propagandists exploited pre-existing images and stereotypes to give a false portrayal of Jews. In this false view, Jews were an “alien race” that fed off the host nation, poisoned its culture, seized its economy, and enslaved its workers and farmers… Germans viewed as genetically inferior and harmful to “national health,” such as people with mental illness and intellectual or physical disabilities [were to be eliminated].

For the Nazis, it was all about “national health.” Jews were compared to rats that carry contagious diseases. What do you do with rats? Exterminate them!

Presently in the United States, physical health is being used as a control agent. Long before the news hit about a virus that originated in China, government officials were passing laws to control our health.

Former New York City Mayor Michael Bloomberg implemented a plan to keep large sugary drinks out of restaurants and other eateries. Sounds harmless. Fortunately, a state appeals court ruled that Bloomberg “had overstepped his authority in trying to impose the ban.”

Even so, government officials keep trying.

The latest example of a government using the health argument to control people is coming from Berkeley, California, once the home of the Free Speech Movement in the 1960s. See if you can spot the sinister detail in the new law:

Berkeley is gearing up to become the first city in the nation to ban junk food from the checkout line in grocery stores. In a unanimous vote Tuesday night, the Berkeley City Council passed the “healthy checkout” ordinance.

Come March 2021, when the measure is set to take effect, large grocery stores in the California city will be prohibited from selling food and beverages deemed unhealthy in a 3-foot radius from the checkout. “It’s not really a ban, it’s a nudge,” co-sponsor of the ordinance Council member Kate Harrison told FOX Business. “What we have discovered is that this law enforces good behavioral economics and facilitates better choices.”

That last line should send shivers up and down your spine. Do you think the food Nazis in Berkeley will stop with food if they can pass a law that “enforces good behavioral economics and facilitates better choices”? (Fox Business)

Who will ultimately determine what’s “good behavioral economics”? If this can be done with food, then what’s to stop politicians from implementing a system of governance over beliefs and ideologies? Actually, they are already doing this. What we are seeing on university campuses is a curriculum designed to more than “nudge” students to adopt unquestioned ideologies.

Anyone who questions, for example, the operating assumptions of the Marxist ideology of Black Lives Matter, homosexuality, transgenderism, and abortion will rarely if ever secure a teaching position in today’s universities. If an existing professor tweets a contrary opinion on these and other sacrosanct dogmas, he or she will be immediately vilified as something worse than vermin.

Forcing people to wear masks during outdoor gatherings in the name of health when there is no health emergency is a current example. The Mayor of Moscow, Idaho, and the City Council ordered a new mask mandate that continues into January 2021, and there’s no guarantee it will be lifted then. Remember when we were told that we needed two weeks to “flatten the curve”?

When a church group decided to defy the draconian and arbitrary order, those gathered received citations and three people were arrested and taken away in handcuffs.

And just to put an exclamation point on the preposterous frivolousness of all this, the very same deputies who arrested [Gabe] Rench [of Cross Politic] for not wearing a mask were seen by him after his two-hour stint in jail hanging out in the police station — with no concern for social distancing and not a mask worn in sight. (Steve Deace)

Then there’s the incident of a woman with family members not wearing a mask watching her middle school son play football in an outdoor stadium with a sparse crowd who was assaulted, tased, and handcuffed by a very large policeman and hauled off under the control of two police officers, one a woman who was not wearing a mask!

She had every right not to wear a mask since Ohio law states that a person does not have to wear a mask if you are sitting with family members and can maintain six-foot social distance from people who are not household members. The video shows she was complying.

So, what starts with “we’re only interested in your health” becomes comply or you will be arrested and taken to jail in handcuffs.