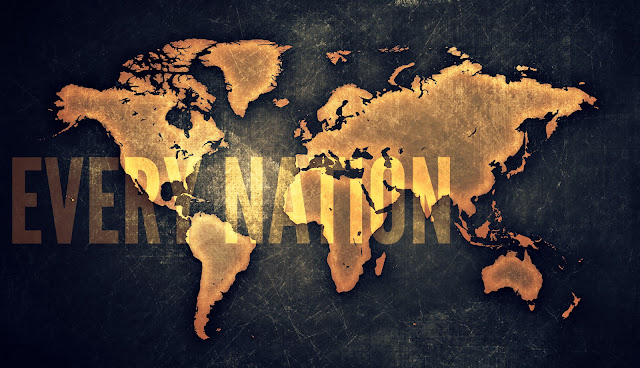 I am a Christian. Which means I'm a follower of Jesus Christ. Paul in his letter to the Christians in Corinth said. "We are therefore Christ's ambassadors, as though God were making his appeal through us. We implore you on Christ's behalf: Be reconciled to God."

An ambassador represents the nation they come from. They represent the interests of that nation. They don't go into another nation and tell them how they should live. They would be out of place. As an ambassador of Christ, we represent His interests alone.

So as a citizen of God's nation, within the nations of the world, I must remain apolitical. It would be idolatrous for me to yoke Christ with any nation of the worlds political ideologies. What inevitably happen is Christ becomes recreated in the image of those ideologies. For example, I was given this cross one day as I enter church. 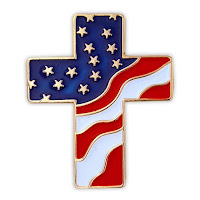 I gave it back. Could you imagine this kind of thing happening in the 1st century church?

Imagine you're in Ephesus. It's evening and you're on your way to brother Caius' house for fellowship. Paul the apostle is there. As you approach the home Paul is out front greeting people. As he is greeting people he hands each person a small cross and in the middle of the cross is a little Roman iron eagle symbol.

I hope you are saying to yourself. "No I don't see that happening." Jesus said, "My kingdom is not of this world. Its from another place." I can't find anywhere in the NT were the disciples were instructed to go and make the nations of this world into Christian nations. He sent them out into all nations of the world to invite all people into the Kingdom of God, God’s nation and become a citizen of His nation. This in turn will make us aliens and strangers to the nations the body of believers live in.

In the end Jesus gathers the nations together and he takes out his chosen people from among them. We see the results of this in Matthew.

“When the Son of Man comes in his glory, and all the angels with him, he will sit on his throne in heavenly glory. All the nations will be gathered before him, and he will separate the people one from another as a shepherd separates the sheep from the goats. He will put the sheep on his right and the goats on his left.

The nations of this world are under the influence of the Evil One and that includes the USA.

And he said to him, “I will give you all their authority and splendor, for it has been given to me, and I can give it to anyone I want to. – Luke 4:6

If you are a follower of Jesus Christ there is only one nation that is Christian on this planet and it belongs to Jesus. It is His bride. It is a nation without borders. It is the body of believers throughout the entire world, within every nation.

The NT instructs us to pray for civil authorities not bad mouth them. You can’t pray for their souls one minute and then the next minute bad mouth them. Plus, the politician you bad mouth today may come to rule over you tomorrow. Paul said do everything within your power to live at peace within the nations of the world. Not for our sake but for the sake of message of the gospel of the kingdom of God.

Peter calls us a holy nation. In modern day American evangelical Christianity, the moto is God and Country. However, Jesus tells us its Him alone and His kingdom. It's His kingdom we live for and it alone. When someone is saved they become citizens of a new nation, a new kingdom who's king is Jesus. It is His rule we follow. It is His interest we serve. We are to follow his lead no matter what the cost.

God’s chosen people throughout the bible looked to another nation that was to come not built by human hands therefore they didn’t long for the nations of the world.

All these people were still living by faith when they died. They did not receive the things promised; they only saw them and welcomed them from a distance. And they admitted that they were aliens and strangers on earth. People who say such things show that they are looking for a country of their own. If they had been thinking of the country they had left, they would have had opportunity to return.  Instead, they were longing for a better country—a heavenly one. Therefore, God is not ashamed to be called their God, for he has prepared a city for them. – Hebrews 11:13-16

Jesus said, “My kingdom is not of this world. If it were, my servants would fight to prevent my arrest by the Jews. But now my kingdom is from another place.” - John 18:36 (NIV) 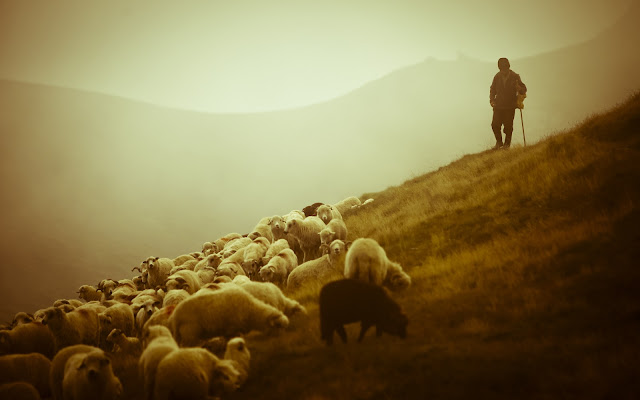 Matthew 9:36-37 (NIV)
36When he saw the crowds, he had compassion on them, because they were harassed and helpless, like sheep without a shepherd. 37Then he said to his disciples, “The harvest is plentiful but the workers are few.

Jesus wasn't speaking about crops like wheat or corn. He was referring to lost humanity. The millions of lost sheep wondering aimlessly on the surface of the earth groping to find something better.

The shepherds in the middle-east gathered wandering sheep in a certain way in the 1st century and still do it today. Middle-East shepherds do not use dogs, horses, or helicopters like western shepherds. They use their own lambs and bellwether sheep. Their flocks are so in tune and love to be near them and love them, the shepherd literally goes out into the wildness, hills and rough country, taking their flocks along and scattering them across the landscape. There they gaze and feed alongside the wild and wandering sheep.

When it’s time to move on the shepherd patiently and gently moves in the direction of home. Their sheep quietly follow them. As they move along in the footsteps of their shepherd, they bring with them the lost and wandering sheep.

This is the picture that is drawn for those who are true followers of Jesus Christ. This is what the Good Shepherd wants from us. He doesn't demand we create some grandiose scheme of our own design to do His work in the world. He doesn't suggest we become embroiled in some complex organization of human ingenuity to achieve His goal of gathering lost souls.

https://www.facebook.com/pg/TheWayToJesus/posts/?ref=page_internal
at July 10, 2017 No comments: