We set aside this time of year
To remember the one who came here
From His throne in heavenly glory
He came to invite us into His story
With gifts of forgiveness, Redemption, peace
And Eternal life are what He brought
But the greatest gift for us
Was Love that can never be lost
Let us then rejoice and be of good cheer
Because the God of creation
Has come near 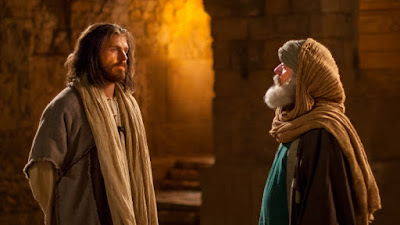 We get the term "Born Again" for the Gospel of John chapter 3. The Christian community has limited the understanding of this term to spiritual birth. However, Jesus meant more when he said it, then what is taught today within christian circles.

One evening a religious leader named Nicodemus came to Jesus in secret to have a private conversation with him. Nicodemus' station in life is important to this narrative. He was a religious man within Judaism. Within his religious sphere he held a political position. Not within the Roman Empire, but within his religious community or the theocracy of Israel. He was a learned man in regards to Jewish tradition and Hebrew scripture. This is critical to this story, his ancestry would make him one of God's chosen people. This would, so to speak, give him a front row seat in the kingdom of God. In other words if God were to establish His kingdom of earth he believed he'd be a citizen.

Here's where Jesus turns his world upside down and inside out. Nicodemus wanted to praise Jesus and let him know he has taken notice of his accomplishments. Keeping in mind that Nicodemus has been taught all his life that he was a descendant of Abraham, one of God's chosen people, a shoe in to be apart of God's kingdom. However, Jesus replies to his statement and at first glance seems odd, "I tell you the truth, no one can see the kingdom of God unless he is born again."

At the beginning of the Gospel of John the author wanted to convey a few themes that would run through the entire gospel. We find one of those themes in John 1:12-13.

"[12]Yet to all who received him, to those who believed in his name, he gave the right to become children of God— [13] children born not of natural descent, nor of human decision or a husband's will, but born of God."

What does this mean for Nicodemus? Jesus came to bring a New Covenant to both the Jews and the Gentiles. In essence Jesus was telling Nicodemus, just because you have a certain ancestry Nicodemus or adhere to the Hebrew scripture, this is no longer a path or guarantee you can be a citizen of God's coming Kingdom. This is the main thrust to this story behind Nicodemus' meeting with Jesus.

Nicodemus' had a certain mind set and it comes through with his response to Jesus. “How can a man be born when he is old?” Nicodemus asked. “Surely he cannot enter a second time into his mother's womb to be born!”

Nicodemus is still thinking in terms of his biological ancestry, therefore Jesus statement wasn't making sense to him. Jesus is stripping this idea away. He's telling him it's no longer going to be about your natural birth, your ancestry. From here on out this will no longer be of any value when it comes to becoming a citizen of God's kingdom, being one of God's chosen people. Something else will take the place of what Nicodemus thought it took to see and enter God's kingdom.

We see this same idea in the writing of other New Testament authors.

Romans 2:29 (NIV)
[29]  No, a man is a Jew if he is one inwardly; and circumcision is circumcision of the heart, by the Spirit, not by the written code. Such a man's praise is not from men, but from God.

Romans 9:6 (NIV)
[6]  It is not as though God's word had failed. For not all who are descended from Israel are Israel. [7] Nor because they are his descendants are they all Abraham's children. On the contrary, “It is through Isaac that your offspring will be reckoned.” [8]  In other words, it is not the natural children who are God's children, but it is the children of the promise who are regarded as Abraham's offspring.

Galatians 3:29 (NIV)
[29] If you belong to Christ, then you are Abraham's seed, and heirs according to the promise.

Jesus knew Nicodemus was really searching for answers so he continues to spell things out for him. He responds by saying, “I tell you the truth, no one can enter the kingdom of God unless he is born of water and the Spirit.  [6] Flesh gives birth to flesh, but the Spirit gives birth to spirit. [7] You should not be surprised at my saying, ‘You must be born again.'

Some say Jesus was referring to baptism when he said "born of water". Remember the most important part of interpreting words and phrase in scripture is context. Every person on the planet has been born of water. When our mothers water breaks we are shortly there after born. (Some not so shortly). The entire context of this passage revolves around natural birth. There is no baptism in the context of this passage. Jesus then repeats himself with the phrase, "Flesh gives birth to flesh (natural birth), but the Spirit gives birth to spirit. (supernatural birth)" We should not go beyond this if we do we are just adding something that's not there.

Titus 3:5 (NIV)
[5] he saved us, not because of righteous things we had done, but because of his mercy. He saved us through the washing of rebirth and renewal by the Holy Spirit,

Now what does being born again mean? When Jesus says, "Spirit gives birth to spirit" he referring to the Holy Spirit bringing to life the human spirit. Once this happen we become citizens of God's kingdom therefore giving us the ability to see it and enter into it.

To become a citizen of a nation you must pledge allegiance to that nation. When you do this you enter into a social contract with that nation. This is what the Bible calls a covenant. For the nation of God or kingdom the Bible calls this the New Covenant which we would recognize today as a contract.

Here's whats great about the gospel of the kingdom of God that Jesus and his disciple handed down to us. Jesus entered into and signed that contract with God on behave of all humanity. You see we as fallible humans could never faithfully keep a contract or covenant with God. Why because we have a sinful human nature but Jesus could because His human nature was without sin. So he did.

Today we have many people who were born into a Christian family or society and as a result many people think they are citizens of God’s kingdom because they were born into it naturally. Nicodemus thought the same thing however, Jesus dispelled this idea when he said we must be born again.

If we believe in Jesus and are willing to change our way of life (repent), humbly ask for forgiveness, pledge allegiance to Him and Him alone and follow Him without reservation, Jesus will send the Holy Spirit into you and give birth to your spirit and you will be born again.