What Is The Salt Of A Christian? 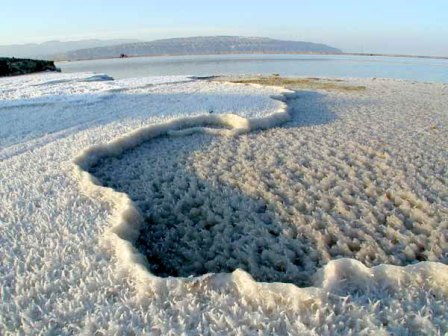 Matthew 5:13 (NASB)
[13] “You are the salt of the earth; but if the salt has become tasteless, how can it be made salty again? It is no longer good for anything, except to be thrown out and trampled underfoot by men.

This verse is not about using salt as a preservative. This world has nothing to preserve. Who preserves rotten meat? You don't. It's about citizens of Gods kingdom showing humanity there is a better kingdom, a better nation, a way that tastes better then what the nations of the world is feeding them. The world seasons life with impurities. God want's to season life with His Son through the message of the Gospel of the Kingdom of God. This verse is about those that claim to be followers of Jesus Christ. Their lives should taste good and different to those that truly want to know the Creator.

What kind of salt was Jesus referring too?

Typically we might imagine the salt we have in our modern day salt shakers. The salt we see at home or in restaurants. This salt would be considered pure salt.
You see salt in its pure form does not lose its taste. It considered a stable compound.

However, when Jesus is speaking of salt here it's 1st century salt, not 21st century salt. The 1st century salt of Jesus day would have come from salt slabs from the Dead Sea. People would scrap these slabs to get the salt they would use to flavor their food. But because they didn't have the refining processes that we have today this salt was full of impurities.

Here's an illustration of what this may look like. I'm from the Midwest originally. The climate is humid. Because of this salt would tend to clump up in the shakers. To overcome this problem we would put rice in the shakers to help prevent this clumping. Now salt is soluble. If the salt where to dissolve in these shakers all that would be left is the rice.

Now what is this salt we are to have as Jesus' disciples? It's what He just got finished teaching them what a citizen of His kingdom would look like. The beatitudes.

This is the salt of the citizen of Gods kingdom. It is this salt that lets people taste that the Lord is good.

That’s what makes this comparison of salt to those who are citizens of God’s kingdom so amazing. Even though we are full of impurities by nature as human beings, God makes us new creations and adds His salt to our lives. So we are exactly like the 1st century salt Jesus was referring too. Despite the impurities, which He knows we have, He still wants to use us so that He will be gloried resulting in us being blessed and people being saved from final judgment.

Now if these beatitudes dissolve from the life of the citizen of God's kingdom they become useless. Not only for God's kingdom but also for the nations of the world.

They would be like Pliable from Pilgrims Progress. Pliable was a neighbor of Christian’s, the main character of Pilgrims Progress, who accompanies Christian for a while. After falling in the Slough of Despondence, Pliable is discouraged and returns home, only to be mocked by the townsfolk.

The word for "tasteless" is the same Greek word we get for "moron" or fool. That is what we become in the eyes of the world, a fool. Fools are laughed at, mocked and never taken seriously. It's like the drunk in a bar telling people about the saving grace of the blood of Jesus. These are people that started building but couldn't finish.


Luke 14:28-35 (NIV)
[28] “Suppose one of you wants to build a tower. Will he not first sit down and estimate the cost to see if he has enough money to complete it? [29] For if he lays the foundation and is not able to finish it, everyone who sees it will ridicule him, [30] saying, ‘This fellow began to build and was not able to finish.'.....[33] In the same way, any of you who does not give up everything he has cannot be my disciple. [34] “Salt is good, but if it loses its saltiness, how can it be made salty again? [35] It is fit neither for the soil nor for the manure pile; it is thrown out.

I was an Uber driver and on a Saturday night, 4 customers got into my car. I just picked them up from a bar. They were definitely feeling happy, if you know way I mean. One of them had to sit in the front passenger seat. He noticed the cross I had hanging from the rear view mirror. He declared out load that he was Christian. Right away someone from the back seat challenged him. They asked him if he was going to church the next day. The question was asked in a mocking tone. He fell silent. The salt was either gone or he really never had any.

Maybe that’s the reason why Christianity has been diminishing over the past few centuries. First in Europe. Now in the Americas. The salt of the church and the individuals in the church has been dissolving. We are becoming less flavorful. Instead of truly following Jesus according to the scripture, we’ve created a Jesus in the image of our patriotism or our personal feelings and are following this re-created Jesus. We create a Jesus in the image of our culture. The world see’s this and does not see becoming a citizen of God’s kingdom as being any better than the nations of the world they live in.

Are the impurities of our lives now more prevalent then the salt? Are we asleep in the light?

The Messiah in the Tanakh

Did you know that there's a "forbidden chapter" in the Tanakh (Hebrew Bible)? What's been hidden from us all these years? It's changed the lives of hundreds of thousands of Jewish people! Watch till the end for a surprising twist! To support this initiative: www.TreeofLifeIsrael.org