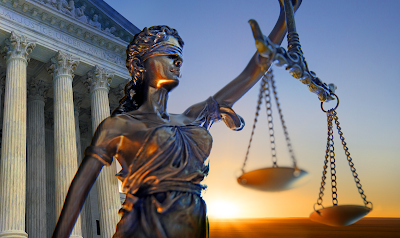 The Lord is a God of social justice. That’s the message in many churches and synagogues in America and the West today. However, here’s the problem:

The Bible doesn’t actually say that. It says (in Isaiah 30:18), “The Lord is a God of justice.” You’ll find a lot of references to justice in the Bible. But you’ll never find it preceded by the word “social.”

Justice is blind. Social justice is not.

Let's say a man robs a store. Justice demands but one thing: that he be tried in a court of justice, and, if he is found guilty, punished.

What about his economic condition: Is he poor or wealthy?

What about his upbringing: What kind of childhood did he have?

What about his race or ethnicity: Is he a member of a group that has been historically oppressed?

Justice asks, “Who did it?”

Social justice asks, “Why did he do it?”

Lost in all these social justice considerations is the individual’s own responsibility for what he did. That’s why social justice advocates have abandoned the term “justice.” They deem justice alone as unfair. And sometimes it is.

A man who was beaten by his father and abandoned by his mother is more likely to commit a violent crime than a man raised in a loving home. However, those facts cannot and should not determine his innocence or guilt. Why? Because justice is, first and foremost, about truth: Is the person guilty or innocent of the crime?

Being a victim, however that is defined, is no excuse for hurting other people. And what about those who are hurt—the victims of those crimes? Shouldn’t they, and other law-abiding citizens, be society’s first consideration? Social justice advocates say no.

They say we need social justice to even things out. And that means favoring the have-nots over the haves—the poor over the rich, the female over the male, and the brown or black over the white. The Bible does not see the world this way. In fact, it speaks against it in very explicit terms.

Here’s a law in the Book of Exodus 23:2-3: “Do not pervert justice by siding with the crowd, and do not show favoritism to a poor person in a lawsuit.”

Here’s one in Leviticus 19:15: “Do not pervert justice; do not show partiality to the poor or favoritism to the great but judge your neighbor justly.”

Moses, the greatest lawgiver in history, declares in Deuteronomy 16:20: “Follow justice and justice alone.” And the New Testament declares in the Book of Romans 2:11: “God shows no partiality.”

None of this means that there is no place for compassion in a system of justice. Of course, there is. The Bible is preoccupied with the protection of the widow, the orphan, and unfortunate. But compassion follows justice. It doesn’t precede it. Also, justice, in and of itself, is compassionate.

First, to the victims of crime and to their loved ones. And second, to the criminal: How can you become a better human being if you don’t first recognize that you’ve done something wrong? That’s why any time we put an adjective before the word “justice,” we no longer have justice. Economic justice, racial justice, environmental justice—any form of “social” justice which seeks to “correct” actual justice—undermines justice.

So, then, if social justice is not a biblical concept, why do so many churches and synagogues promote it? Because many Christians and Jews no longer regard biblical principles as binding. Because it’s a lot easier to dispense compassion than hold people to a biblical standard. And because certain political ideologies have superseded the Bible in many houses of worship—and these certain political ideologies, as a guiding principle, holds that the weak are good and the powerful are bad.

That’s why the great battle of our time is between Judeo-Christian values and anti-Christ values done in Jesus name. The former is rooted in justice; the latter is not.

The Lord is a God of social justice. That’s the message in many churches and synagogues in America and the West today. However, here’s the...